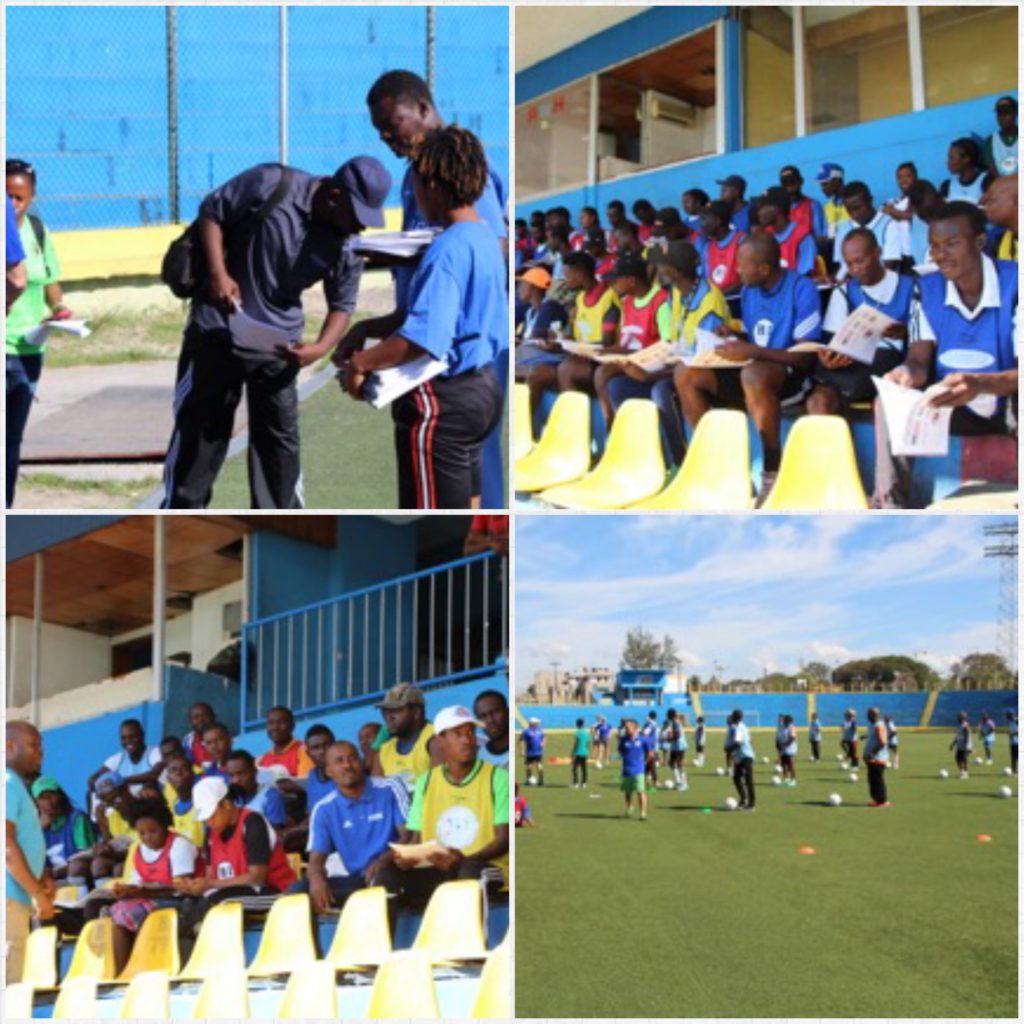 I woke up to the cocks a crowing on a beautiful January Monday in Port au Prince.  Coffee and Breakfast were ready ….but unfortunately our crew was a little sluggish and we set off for the National Stadium at 7:45am - later than planned.   The traffic was horrendous and it meant we had to slug it out - literally - with the morning traffic and arrived at the stadium at 8:45am - the course was due to start at 9:00am!!   The driving of Pouchon and Eric was nothing short of heroic.   Our crew consisted of Tony bossman Sanneh, THE Donny Mark, organization guru Tod Herskovitz, Superstar of channel 11, Roxane Battle, Sanneh Foundation super supporter Meredith Crosby, Regional ODP Coach and former pro Anne Poulin, Eric Frisco  - who looks after everyone - our translator known as “Clever” and security personnel Pouchon and Stanley.
Some general observations about driving and street life in Port au Prince …….  The driving has one rule.  Every man or woman for themselves.  Everyone expects you to cut them off or cut in front of them - and therefore everyone does!!   Cars go 30-50 miles an hour down crowded streets with random pedestrians walking on the street too.   If someone is too slow - no problem just drive on the wrong side of the street.  The Children are dressed immaculately in school uniform - shirts ironed - pants/skirts pressed and dress shoes shined.  There even shoe shiners shining the students’ black shoes!   These pupils would not have looked out of place at Blake, Tartan or Our Lady of Grace schools…  The girls looked adorable in their dresses and the boys look spiffy in their pants shirts and ties.  The stray dogs in this city are all related. They are 99% small, light brown, short haired, mongrels.
Back to the stadium.  This was the first day of the first ever Coerver Coaching Youth Diploma in Haiti.  After we had obtained entry into the stadium we assessed the options for registering the coaches and setting up for the lecture and the filed session.  The stadium was great - field turf - a little worn but perfect for soccer skills teaching.  Every coach was issued a Coerver Course book which was donated by the Sanneh Foundation and assigned a color for demo group purposes.  We used the available shade at the top of the stands for our intros and lecture period.  Roxanne and Meredith did a great job with the cameras whist Tony did some intros and then got back to his toy drone.  My pep talk was translated beautifully by Clever and Pouchan and they were told that all they would earn their diploma and Diploma shirt if they attended the entire 4 days.
Finally we were on the field.   They Haitian coaches were enthusiastic, inquisitive, happy and very athletic!   I worked them on Warn-ups and Speed drill today and we almost got through all the drills in the drill book for Monday, before running out of time.  It was hot and sticky but we were all given water pouches from which were told to suck on throughout the morning.    There were at least 30 women coaches attending which was very encouraging!!  My Creole diction expanded to about 10 words or phrases, and my broken French was called upon several times.  Anne and Donny did a great job assisting and Tony, Roxanne and Meredith all got some great shots, whilst Eric and Todd schmoozed with the SF coaches, renewing old friendships.
After the session we had an amazing tour of the National Museum.  From the indigenous Indians to the Spanish to the French to the great Slave Revolution, we followed the startling, brutal and fascinating history of this fascinating Country.  There were amazing pictorials, artifacts, Photos and powerful and colorful historical art gallery of Haitian art.  Outside the museum we were amused by a very talented Haitian “freestyler” who drew quite a crowd.

It was time to visit the Sanneh Foundation headquarters in Cite Soleil.   This was a massive eyeopener as the Tony has placed his mission in the poorest neighborhood in Haiti.  We went for a stroll, accompanied by our security.  The local people were busy, for the most part and the spirit of entrepreneurship was alive and well with many small stands selling Knick Knacks and all sorts of merchandise.  We decided not no partake in the local street cuisine. I bought some sandals  - which was great relieve on my feet!   The conditions here were desperate.  Stray dogs, pigs, goats and chickens roamed freely and the drainage - or lack thereof  - gave forth a sickening stench that I could never quite get used to.  Tony lead the way and i believe that he wanted our group to see first hand the poverty of the area - but also the spirit of the local people.  Little boys and girls would cling to us constantly but we had to make sure that we put them down and made sure that they did not accidentally leave their own neighborhood.  The houses were literally no more than a few cinderblocks with a corrugated iron as a roof.  Bars everywhere to keep the unwanted out.  We had some curious looks, especially as the sight of caucasians in these parts was not common.  But the kids we spoke to were super friendly and all wanted us to take their photos and see them on our phones!  Occasionally I’d see an American T-shirt that said “University of Wisconsin LaCrosse” or a Nebraska Cornhuskers cap!!

The Sanneh Foundation complex is simple, organized and a wonderful haven for these young Haitians to get an education, a good meal and to get some good soccer coaching.  The “field” is gravel.   No need to cut the grass at least.  I will never complain about any field again! Tony and his group are doing a wonderful thing here.  280 kids are serviced and about 21 coaches get employment as coaches or teachers.  The kids learn English after they get out of school and play soccer followed by a nutritious meal.  I had time to teach the kids a little English and we had them speaking “cockney” after about 10 minutes.   It was an awesome experience to meet the SF coaches and see them in action.  It was funny to see they were all wearing the yellow Minnesota United/Coerver Camp T-shirts that we donated about 4 years ago……
The food at Nicole’s Place - our residence - is very good and we are spending the evening relaxing, reflecting, preparing and oh yes drinking a little Prestige - pretty much the ONLY brand of beer available in Haiti!   “Bonswa toute le monde”