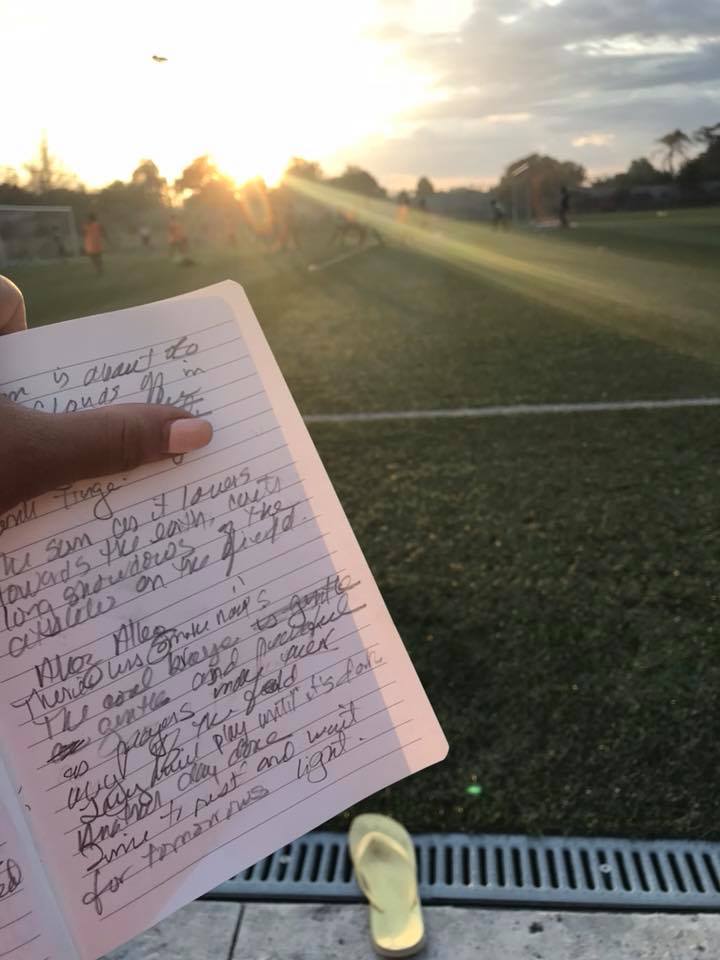 A writer can find inspiration anywhere:

I never knew it was so peaceful on a soccer field. Thankfully it’s partly cloudy and a cool breeze blowing after an 88 degree yesterday. It’s late afternoon just before dusk and a smoky haze fills the air. I’m told it’s the result of residence here burning their garbage. Port au Prince lacks any semblance of a sanitation system except for the open piles of garbage strategically placed off to the side of each major intersection. It’s normal for young children to play near puddles and open streams of sewage.

That’s why the soccer field at the Haitian Football Training Complex is such an oasis.

I counted four teams practicing on pristine Astroturf. “The Ranch” as the facility is known by the locals, abuts both a concrete cinder block wall and chain link fence. The field is neat and orderly, littered with only practice cones and soccer balls that resemble the sound of popping corn as they make contact with an athlete’s foot or head.
Popcorn.
Pop. Pop pop. Pop pop pop.

Jerseys are neon colors; orange yellow and turquoise and some red and black, the colors of this country’s flag.

The chatter of a 100 15 and 16-year-old boys and girls —elite athletes representing Haiti’s best—rise and fall alongside coaching points.

“Allez!” “Allez!” (ah-lay —the French Word for go) calls the coach at the start of each training drill.

The sun is about to set and clouds off in the distance are beginning to reflect an ever so slight pink tinge. As it lowers closer to the horizon, the sun casts long shadows on the field.

The smoke has waned but the breeze is still cool, gentle and peaceful.
It will be dark before they make their way off the field.
Another day done.
Time to eat, rest and wait for tomorrow’s light.