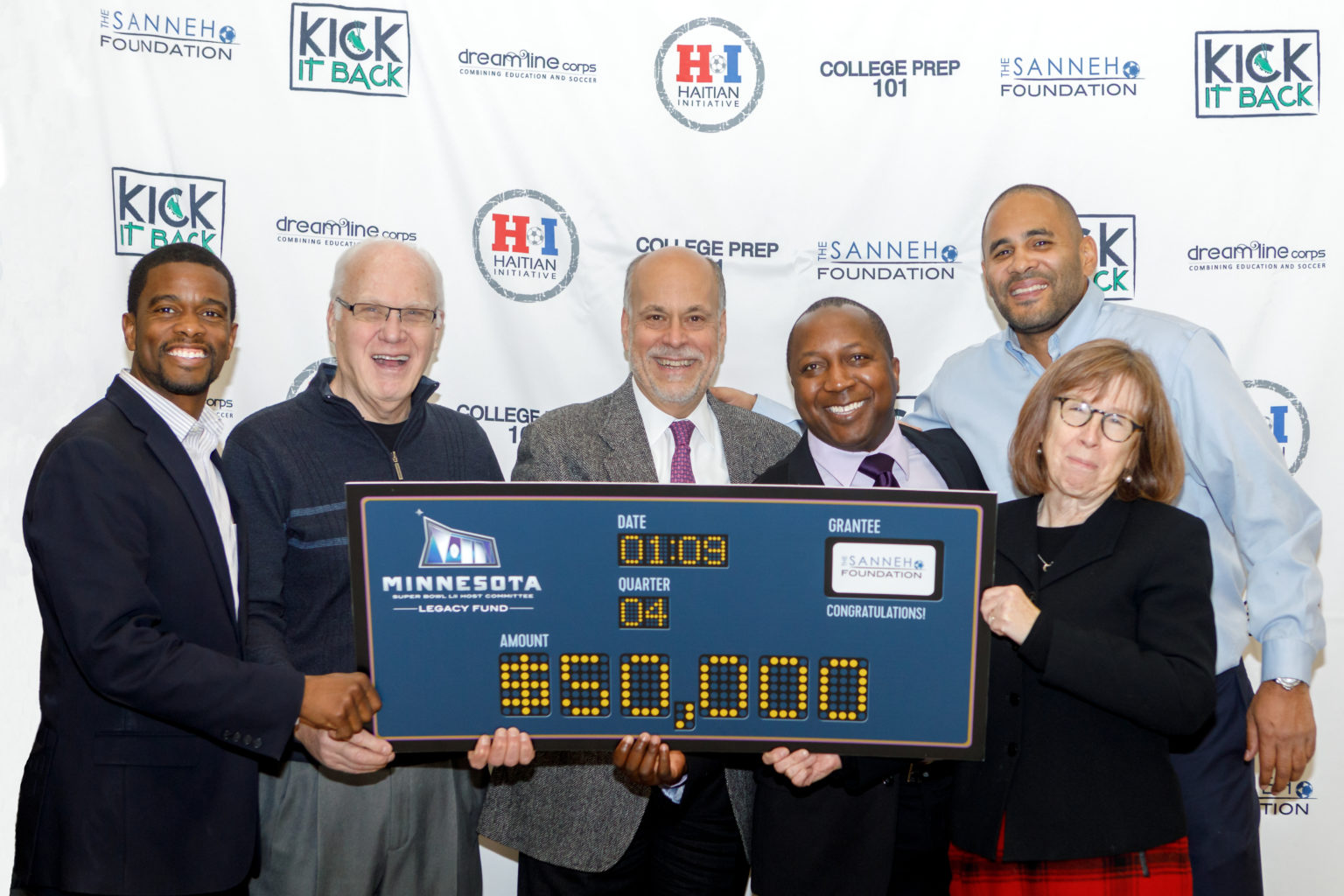 It was an eventful day at Conway today, as we were visited by friends from all over the state, community youth, and a special committee, to gather in the gym to make a big announcement. The Sanneh Foundation, Conway Community Center, and many partners have been waiting weeks to unveil a huge surprise to the community and the City of St. Paul. This surprise has been bottled up for weeks, but we were finally able to reveal it today. With the help of the the Super Bowl 52 committee and our partners at Securian Financial Group and Abbott Global Health and Research, we were able to present to the community a $50,000 grant given to us by the Super Bowl committee to renovate the Conway gym.

Many visitors came to the neighborhood to share in the moment including The Sanneh Foundation board members, representatives and volunteer staff from both Abbott and Securian, E.J. Henderson, Viktor the Viking, and Minnesota Viking Cheerleaders, State Representatives, as well as the newly appointed Mayor of St. Paul, Melvin Carter, plus more! “I’m excited about the way this space is going to look once this project is complete… but I’m really, really excited about all the ways The Sanneh Foundation uses sports to prepare our young people for life,” said the Mayor. “It is about community, and today we are going to have an awesome day.”

For the last 52 days, the Super Bowl committee has been all over the state, awarding grants in communities for various youth-initiated projects, as a part of the 52 weeks of Bold North theme, as the fifty-second Super Bowl will be hosted right here in Minneapolis at U.S. Bank Stadium. “Hosting a Super Bowl is about much more than football,” the vice president of the Minnesota Super Bowl Host Committee told a group of children at the Conway Community Center gym on Tuesday. “It’s also about leaving a legacy.”

The grant to The Sanneh Foundation is the 49th awarded by the Minnesota Super Bowl Host Committee, and was funded with the help of Securian Financial and Abbott. The committee has been giving out weekly grants to similar organizations since February qqas a part of the Super Bowl Legacy Fund. By Super Bowl Sunday, it will have awarded 52. With three weeks to go, the committee has given more than $4 million. Each week, they have a ceremony and celebrate. All the grants are aimed at improving the health and wellness of Minnesota children, specifically those living in poverty or those of color.

After the announcements were made, the celebration began. Food was served to everyone, and volunteers from Abbott and Securian were matched up with students from St. Paul Academy Middle School, Easter Heights Elementary School, and Twin Cities Academy for a day of fun, including partner interviews, relay races and photos. Viktor the Viking, E.J. Henderson, and even the mayor joined in for festivities! It was definitely a day to remember.

“I am pretty excited about this check, but also having so many visitors here,” says Tony Sanneh, CEO of The Sanneh Foundation. “The kids love it when people come here and they get to play and make new friends. That’s what community is all about.”